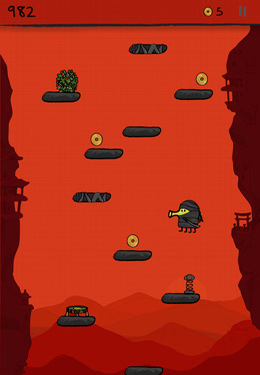 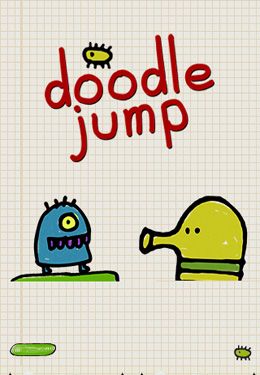 An exciting game is quite known in iPhone. Your goal is simple: to jump as high as possible, jumping from platform to platform, collecting jetpacks, avoiding the black hole and destroying the villains with the balls on the way. The higher you jump, the more interesting the game is, because the platforms begin to move and there are more and more new monsters. In Doodle Jump for iPad you, as well as in a version for iPhone, have to jump back from the platform and to climb as high as possible. Sideways you can see what players reached this place and to compete with them. This feature was first implemented in the game Doodle Jump. The new version now has the new epic theme Ninja, which is available for iPad! And it looks even more stunning on a beautiful 10 inch screened iPad! You'll collect coins and exchange them for the equipment, which will give you different abilities, such as double jump, or to become a sumo wrestler, or become invisible; jetpack and propeller can be upgraded, and you can get extra lives. And of course, new powerups, new monsters and some new challenges, and also 1,000 free coins!
Rate the game
?
Votes not enough
0 votes