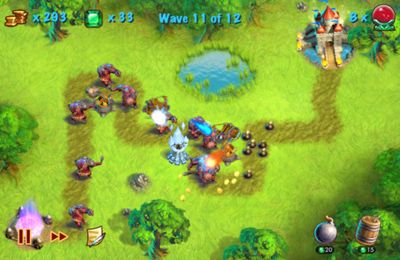 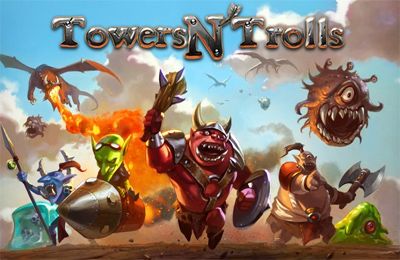 Towers N' Trolls - Defend your kingdom from invasion of hordes of trolls, in fascinating, fast in training, but difficult gameplay. Towers N’ Trolls combine quickly changing arcade action with fast strategy. The genre of protection of a tower is updated within 21 century in mobile games with the exciting moments where your destiny fluctuates on the edge of the blade. No ambushes and expectation of the enemy, they are already at your door – it’s up to you how to stop them! Towers N’ Trolls shows environment beautifully painted manually and playful carefree monsters from Age of Fantasy. Game passes through 6 worlds and 30 unique maps, including the Lonely Wood, Fertile Pastures, the Snow Wood, Underworld, Barren lands and the North. There’re 40 Levels, 8 different worlds through completely different environments, 10 enemies with thousand structures of animation, 3 levels of complexity, special weapon, including – kegs with gunpowder, minefields, and clouds of poisonous gas! In the new version mistakes are corrected, shop to level Brutal Campaign is added, Dark Night Challenge level (5 maps), shop to level Normal/casual Campaign of AFTER World 2 is added, the limit of modernization of certain products in shop is increased. In the new version the new world of Challenge (5 new maps).
Rate the game
?
Votes not enough
0 votes